My Journey from Being a Nurse to a UK Fintech Founder

I wanted to study fine arts. Ever since I was a kid, my favourite thing to do was to draw. I have collected so many sketchbooks full of artworks, even my school textbooks were full of ballpoint pen sketches in random pages. When I was about to graduate highschool, my mom asked me what course I was going to take for university, and I said fine arts. She was quiet for a few seconds and stared at me with a baffled look on her face; one that showed concern and perhaps slight disappointment. She asked me why I wasn’t taking up nursing, which was the most in demand job out there. If I became a nurse, I could go to the USA and earn thousands of dollars. As our culture dictates, success can only be attained the moment you earn money in a different currency, and being a nurse was one of the fastest ways to get out of the country. I didn’t feel like I had much choice, so I gave up my passion and studied nursing.

My Life as a Nurse

£208. Per. Month. In an institution where a patient’s room costs somewhere from £600-£800 per night. To make things worse, that salary was for working 60hrs per week because I was required to do overtime work- that’s 50% more hours than in the UK average working hours for 80% less pay… I wanted to buy my first smartphone as an independent working woman, but couldn’t even afford the cheapest one. So I tried to apply for a credit card, but was even too broke for it. I was rejected 3 times because my salary could never meet the minimum requirement of Php15,000 (£220) to own a credit card.

Can you believe that even in this situation, I was actually amongst the lucky ones to even earn a salary? Most nurses I know didn’t even get paid, in fact they even had to pay their employers just so they could work and get hospital experience, because that was a requirement if you wanted to apply for a job abroad. I know that because my sister was in that exact situation for a whole year.

I refused the idea of spending the rest of my days living in financial insecurity so like many Filipinos, I decided to move to the UK for a better shot at life. I wanted to earn enough money to be able to support my family financially and ease the burden off my parents. I had financial goals like buying a house for my family, paying off debt, and just being able to afford stuff I wanted.

I arrived in London in November 2014 at the age of 23, with £100 in my bank account. It was all the money I had. That was my entire net worth. I started as band 3 junior nurse whilst working towards my licence here and my starting salary at the NHS was somewhere around £1600-£1700. That was a huge jump, and my first paycheck made me feel incredibly rich.

Yes I was really naive. I had no idea how expensive the nice things could be, how much I was supposed to spend on rent and how different the cost of living here was.

Even though I didn’t feel rich for very long, I did become much more financially comfortable in the UK, and was able to send money home. I was also starting to build some savings, which gave me more peace of mind knowing I have funds for rainy days.

I had a problem though. Apart from saving for emergencies, I didn’t really know what else to do with my money; so I wasn’t managing my finances thoughtfully. I saved a bit, spent the rest on things I didn’t need, then left most of my savings in a low interest savings account for years on end. I did not know anything about growing money, and I had the mindset that I just needed to work until retirement age. My concept of “financial freedom” was just having money for rainy days.

The beginning of my entrepreneur journey

While working as a nurse, I decided to use my free time to learn about design since my passion for arts was still there. Initially I thought of studying at a design school, but the tuition fees were too expensive for international students (£15,000 per year), so I just watched tutorial videos from youtube and used a free trial of Adobe Illustrator. My only investment then was a laptop and time.

At that time, a friend of mine who works in the finance industry had an idea of an app that would help people be financially free, so I helped him create a logo, just as a hobby and to try out my newly learnt skill. Then I tried designing the website, icons, infographics… our project was turning into life. I became a self-taught designer and eventually became part of the founding team of what is now known as Nova Money. 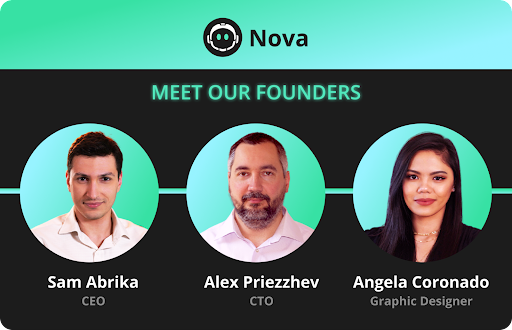 Because of Nova being a finance app, I also started learning more about finance. I discovered how little I know about financial planning, and that I was making so many mistakes with how I was managing my money.

My first problem was that I didn’t know how to think of money, and I didn’t know that I didn’t know. For example, my objective was to take £500 out of my paycheck and stash it in a savings account. Like most people, I thought it meant I would save £500 per month, and will save £6,000 per year. No one told me that’s not how money works.

For example, there were months where I had unexpected expenses and withdrew from my savings account. But the biggest problem was caused by credit cards. Credit card spendings don’t show up in my banking statement, don’t impact my current balance and will only be debited in 30 days. So I thought I was saving £500 but actually I was overspending on credit cards. When I started to aggregate all my transactions from all my banks and credit cards, I realised that there were months where I spent more than what I earned. While I was growing my savings account by £500, I was also growing my credit card debt by £100, my net saving was only £400. Banks never told me I was mismanaging my money. I’m sure they were happy because that’s how they make so much profit.

I learned from my mistake and started to run my own monthly accounting on all my transactions to know how much I earn, spent and saved. Then we took that process and designed the Nova Money AI to do just that so that our users won’t repeat the same mistake.

The second mistake I made was that I didn’t invest sooner. I knew absolutely nothing about investments, never studied it in school, and thought it was only for rich people. I was saving a good amount of money, beyond what I needed for my emergency fund and short term goals, but I kept the rest sitting on a savings account being eroded by inflation. Once I started to learn about the investment markets, I realised that even someone with an average salary who never studied finance can and should invest. This mistake cost me more than £10,000. I finally set up my Stocks & Shares ISA account and started investing every month.

And lastly, I opted out of a good retirement plan - the NHS pension scheme, because I wanted extra money every month. I would rather spend the extra £200-£300 instead of contributing it for retirement. Nearly all the nurses I worked with opted out of the pension scheme, so I did too. No one at that time really explained to me why that was a dumb thing to do, so I didn’t think twice. This mistake cost me nearly £30,000.

I think what prompted me to really have a look at things is that somewhere down the line, I started asking myself: Why do I feel stuck with my finances? My savings have been sitting in the same range for years. I am increasing my income, I am working extra shifts all the time, but why do I always feel like I don’t earn enough?

At first I was kind of blaming myself, but then I realised that I was never really taught how the financial system works and how to manage money effectively. Financial freedom to me before was just having enough for rainy days. I also realised that there was such a big gap in financial education. Only people who have money learn how to manage money, and we missed out on financial literacy. Nobody within my friends and social circles ever talks about financial planning, investments, or building assets. I wonder why.

Where I am now

Despite all my mistakes, I managed to increase my net worth from £100 at 23yrs old to more than £140,000 independently at age 30 while working as a full-time nurse. Instead of hoarding savings, I started growing my money through investments in different assets, and I also invested in myself to acquire high income skills outside of my nursing career. Now I have fully transitioned from nursing to working on my startup full time and the amount of things I learn is insurmountable.

By being the co-founder of Nova Money, I became an advocate of financial education, especially to people like me. I’ve built a community and am doing my best to help spread financial literacy to my fellow Filipinos, and eventually to more people.

I’ve gone through a pretty peculiar path in life, but I do owe it to my mom for asking me to take up nursing in the first place. Otherwise I wouldn’t have moved to the UK, and I wouldn’t be where I am now. It’s funny how life works out sometimes, but I am grateful for the opportunities that come my way and the people I meet in life. My journey from being a nurse to an entrepreneur is definitely not an easy feat, in fact it’s the hardest thing I’ve ever done. But through all of the hardships I am proud to be who and where I am today.

The Nova Money app is free to download in the Appstore and Google Play.
If you’d like to reach out, email me at angela@novamoney.com