How does social media make us more materialistic?

The more you use social media, the more materialistic you become.

Its effect on us has been studied by the American Psychological Association. [1]

They add that materialists - those who value possessions highly - experience destructive consequences like ‘lower levels of well-being’ and ‘worse academic outcomes’.

Which begs the severe question:

How is social media making us materialistic?

Here’s a magic trick to show you. Pick a product, any product, and I guarantee there’s a social media influencer selling it.

2 in every 3 US firms market through influencers, for products ranging from diamonds to deodorant, and even dog clothes! [2]

They are popular for many reasons. Influencers tie their products to their personality, such that buying from an influencer feels like engaging with them directly. That’s any fan’s dream, and marketers want to capitalize on it.

Take Kylie Jenner. She launched Kylie Cosmetics, her multi-million pound firm [3], following her success as a reality TV persona. To link her appeal to her product, she sends a thank-you note in her own handwriting alongside every Kylie Cosmetics purchase. It makes the buyer feel as though they’ve received something personal from a celebrity they admire.

As well as this, influencers have a huge outreach. 9 out of Instagram’s 10 most-followed accounts are celebrities, each with over 130 million followers [4]. By advertising through them, companies instantly tap into a large base of potential buyers.

It’s no wonder that 80% of marketers believe that using influencers is ‘effective’ or ‘highly effective’ for advertising. [5]

Nor is it any wonder that this impacts buyer behaviour. Social media users average 144 minutes online per day, during which time they are exposed to influencers, without necessarily knowing it… [6]

Influencers are the new advertisers

The line between content and advertising is becoming hazier. Especially within videos.

Television used to monopolise the video market. It has always kept the same advertising model: shows run with ad-breaks peppered in every so often, which are distinct from the shows themselves. Occasionally the two cross over, e.g. via product placements, like the famous Delorean in Back To The Future, but for the most part, viewers can easily distinguish TV shows from advertising.

We are moving away from TV though, and towards content-sharing platforms like Youtube and TikTok. UK households have been shaving minutes off their average daily TV-viewing time over the years. [13] At the same time, 18-34 year olds now prefer Youtube to traditional programmed TV. [12]

Since Youtube allows users to skip longer adverts - a feature we all use - marketers have had to change their ways.

They have therefore woven their products tightly into influencers’ content. For example, hip-hop Youtuber Trap Lore Ross promotes credit-card holders by rapping about them mid-video, seamlessly transitioning from his channel’s focus on telling stories from the world of hip-hop.

Another Youtuber, Danny Gonzalez, populates his videos with goofy edits. In one he advertises a food-delivery service by editing a genie version of himself in his video. His genie self then narrates whilst his normal self cooks. It’s bizarre. But it fits his content perfectly.

Influencer advertising is subtle because it is often consistent with the content surrounding it in videos. Yet subtlety is its superpower. To understand why let’s look at how these ads effectively persuade us as consumers.

We have three ways of resisting marketers’ persuasion: avoidance, contesting and empowering. Avoidance means looking away from an advert. Contesting involves challenging the claims made by advertisers - will new shoes really make me happy? - and empowering involves using our freedom to say ‘no’, because deep down we like feeling free! [14]

What our defence mechanisms have in common is that they rely on us spotting advertisements. To avoid, contest or empower ourselves against something, we must first believe that it is trying to persuade us! And that’s easy to miss when adverts look so much like the content we’re enjoying. So, influencer ads have the potential to break through our brain’s anti-persuasion defences.

Marketers have caught on to Youtube’s effectiveness - 56% believe Youtube videos are an effective advertising technique - hence the platform has risen above others across social media: [15] 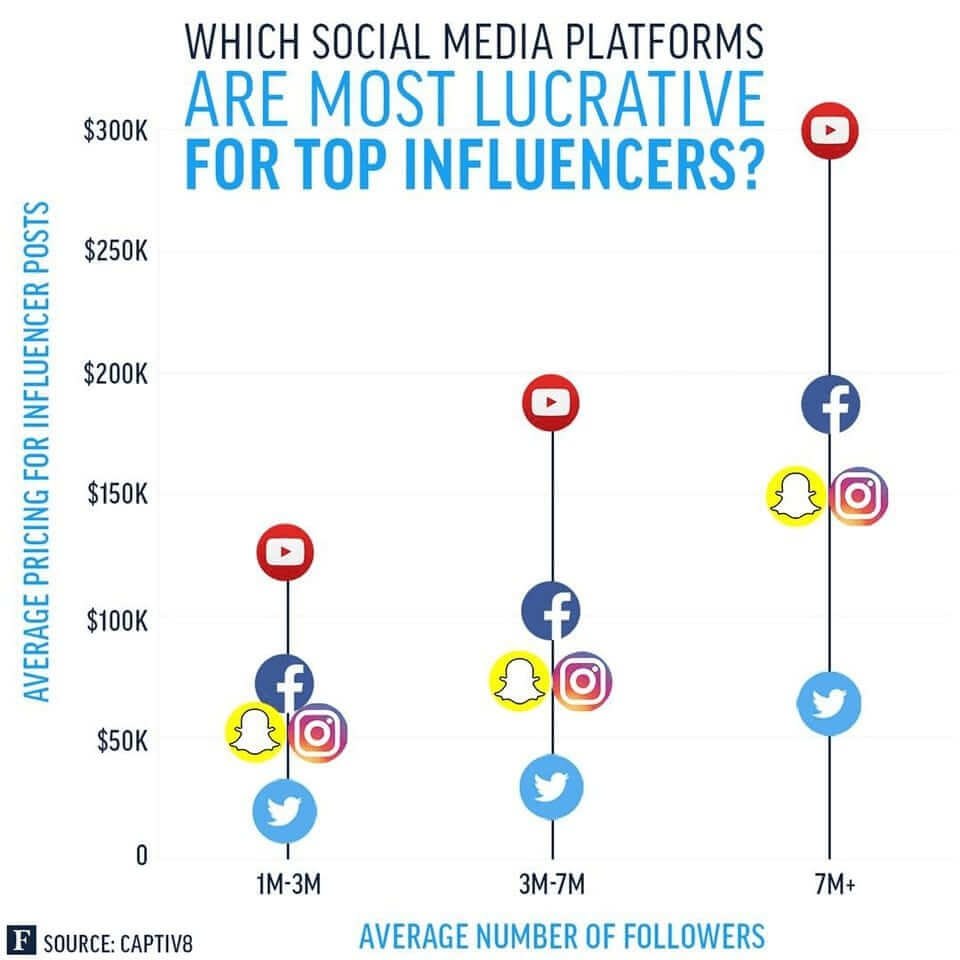 Whilst influencers flaunt their products, social media platforms encourage us to flaunt our own.

Likes motivate our content. They sit alongside all of our posts, like a marker of success. More likes means a higher number appears by our post, indicating to our brain that the post is better.

At the same time, likes make us feel good. They are colorful and shaped around positive stimuli - e.g. a blue thumbs-up or a red heart. This pleases our brain; we experience a dopamine rush when we get likes, similar to when we exercise or take recreational drugs. [7]

Consequently, we hunger for likes, which puts us in continual chase of material goods:

On the pursuit of ‘happiness’

When combined, influencers and likes put us in constant chase of material wealth. Here’s how it works:

With influencers pumping out new posts all the time, us followers are in a constant game of catch-up.

But attending open champagne parties with a Rolex on your wrist hides a less glamorous reality: the increasing amount of credit card debt, which now exceeds $1 trillion globally. Glamour has a hefty price tag.

This is the side of the coin that you will never see on social media.